The General Assembly reached an agreement on HB 62, the Biennial Transportation Budget, and the Governor signed the Bill on April 3rd, 2019.

The Bill contains the following provisions for changes to the state’s Gas Tax:

You can find an estimate of the new revenue to Miami Township and other neighboring jurisdictions in Montgomery County that HB 62 will provide Here.

This increased revenue is much appreciated and will certainly help Miami Township in continuing efforts to resurface our roadways, but unfortunately we still have a long way to go. An independent audit of the Public Works Department was completed in 2015 to extensively evaluate the condition of Miami Township roads and the audit findings determined that we would need to spend $1.1 Million per year on resurfacing to adequately maintain our roadways. Two roadway resurfacing levy attempts in 2015 & 2016 failed to gain enough public support.

In 2018, Miami Township spent roughly $300,000 on resurfacing. This projected Ohio gas tax revenue increase, along with motor vehicle license tax revenues, will provide us roughly half yearly of what we need to adequately maintain our roadways. Inflation costs for materials used to resurface roadways has historically increased yearly at 5-15%.

Miami Township receives tax revenues from vehicle registrations through the Ohio Bureau of Motor Vehicles (OBMV). All passenger cars, trucks, motorcycles, motor homes, trailers, etc., registered by residents of Miami Township generate much needed revenue for roadway maintenance, but you must state you are a resident of Miami Township to the deputy registrar at the time of registration. If not, our monies may go to the cities of Centerville, Dayton, Miamisburg, West Carrollton, Moraine or Carlisle. 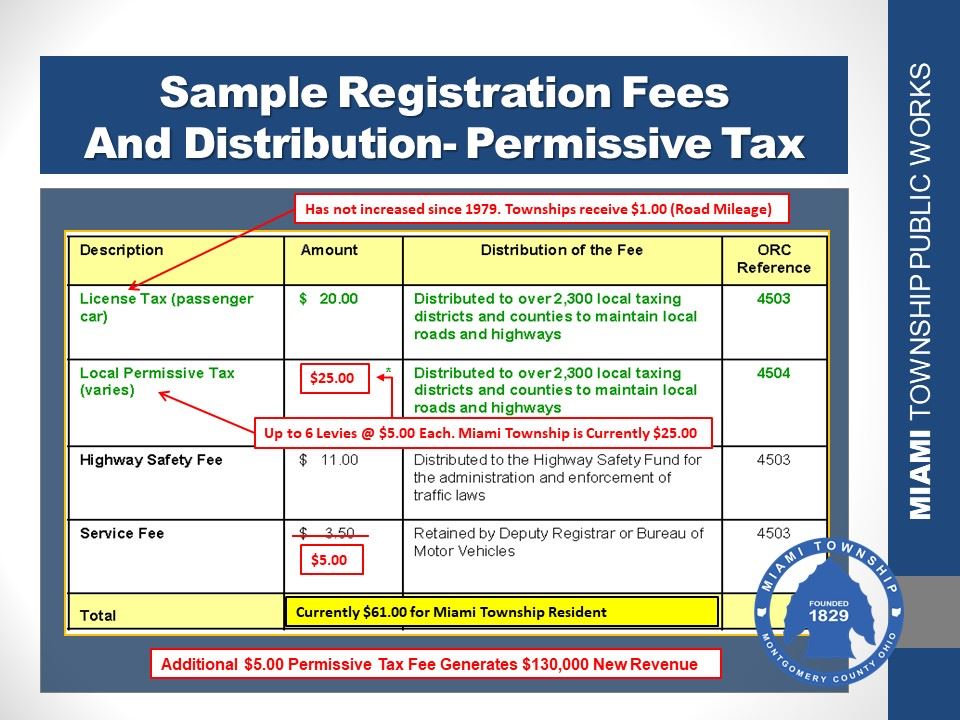 In April of 2016, the Township began taking the necessary steps to enact an additional $5.00 supplemental license tax fee in attempt to compensate for the nearly $450,000 per year reduction in property tax revenues since 2009. Two public hearings were held by the Board of Trustees prior to the adoption of formal legislation. Many local jurisdictions have already enacted this additional tax for vehicle registrations. The additional fee for registrations began in 2017 and 100% of the revenue generated goes to Miami Township. This additional revenue is used according the Ohio Revised Code (ORC) Section 4504.18.The Township currently receives roughly $225,000 in license registration tax revenues to be used for roadway maintenance.

According to ORC Section 4504.18, the funds generated from the license registration fees shall be used “for the construction, reconstruction, improvement, maintenance and repair of township roads, bridges and culverts; for purchasing, erecting and maintaining traffic signs, markers, lights and signals; for purchasing road machinery and equipment, and planning, constructing and maintaining suitable buildings to house such equipment”.